Buying & Customising The Legendary VW T5 Transporter Security: The Evolution In Tactics Employed By Pirates On The Gulf of Aden

There has always been a lot of speculation surrounding the work of Damien Hirst. People often argue that his work is not worthy to be exhibited at prestigious galleries such as the Tate. One very critical art reviewer, Julian Spalding, was even banned from his latest Tate exhibition after he published a scalding review branding Hirst a ‘talentless conman’.
Public popularity for the artist has been growing massively and he is known as the richest living artist in Britain, with an estimated net worth of £215m (2010)

As a conceptual artist, for Hirst it is more about the message than the merit. Many people criticise Hirst saying that it takes no skill to hang a shark in formaldehyde, or to paint dots on canvas. However it is this work that has made Hirst so popular, proving that evoking emotion is just as essential as the piece itself. For an artist it is very rare for them to see success in their own lifetime, and Hirst has managed to profit greatly from his popularity. The main turning point for Hirst was in September 2008 when he broke away from the norm and decided to sell his work straight to the public. This was unprecedented for any artist, and Hirst managed to time it perfectly; before the economic crisis. The Sothebys one-artist auction raised over £111m, and set a personal record for Hirst as one item sold for over £10m.

Since then Hirst has gone on to cause a lot of controversy and speculation in the art world, but yet he is still considered one of the most influential British artist alive.
The exhibition at the Tate Modern was a collection of work created throughout the life of Hirst, including his most early spot paintings, the controversial formaldehyde suspended animals and even his latest piece; a human skull recreated in platinum, and embedded with over 8,500 diamonds.

Photography was not really allowed during the exhibition, but we did manage to snap a couple of pictures for you. However a picture of ‘For The Love of God’ was almost impossible as you were accompanied by security guards when viewing the piece.

The exhibition was laid out in rooms, typically reflecting the progression of work throughout the life of Hirst. In Room 1 was a lot of his early work and as you progressed through the exhibition you see the journey Hirst has made through his career with some of his most contemporary work on display in room 14.

Room 1 – The early work in this room laid down the themes which Hirst would go on to develop through his career. Work displayed in this room includes With Dead Head 1991, 8 Pans 1987, Boxes 1988 and the first Spot Painting from 1986. As a student it was obvious that Hirst had a love of colour, which was soon incorporated into his own work such as the Spot Paintings. The early Spot Painting would have been completed by Hirst himself which is obvious through the random nature of the circles, with over 1,400 in existence it is believed Hirst only painted 5 of these himself.
Boxes became one of Hirst’s most notable early pieces of work as it was the first piece he put on display at the Freeze exhibition. Obvious influence came from the American minimalist art that was being displayed at the recently opened Saatchi Gallery, and it was at this time that Hirst realised his work wouldn’t fit into the art world in its current state. 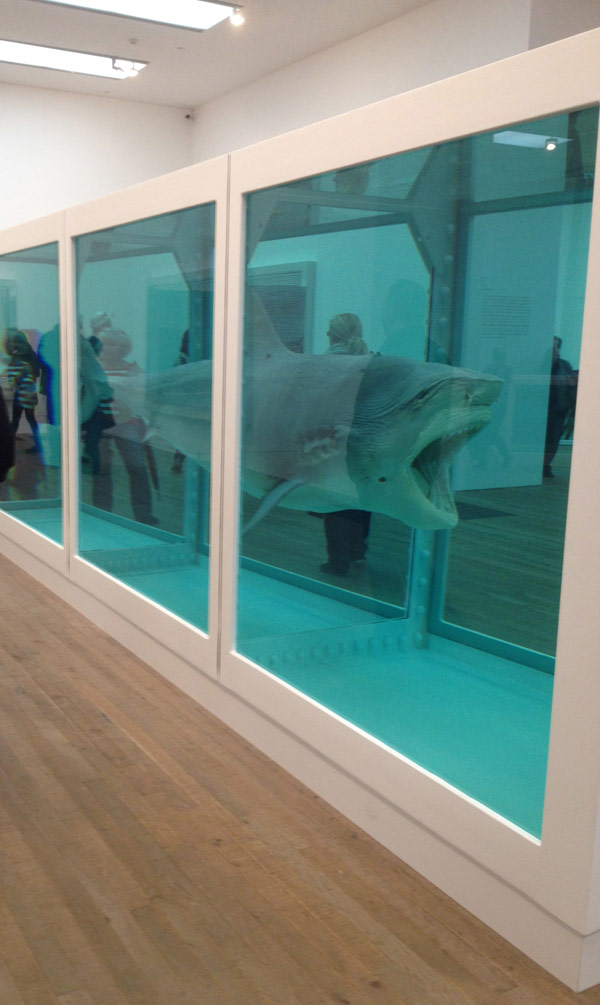 Room 2 & 3 – As you walked into the larger rooms you were struck by the installation pieces Hirst has become known for; A Thousand Years 1990, and The Physical Impossibility of Death in the Mind of Someone Living 1991. Along with these pieces Hirst had displayed a selection of spot paintings and a couple of other glass vitrine displays.
A Thousand Years 1990 is the first of Hirst’s work in which an arrangement of elements were housed within a glass vitrine, which shows a whole life cycle being played out. The piece is made up of 3 main elements, the minimalist white box in which the maggots hatch, a severed cows head upon which the developed flies feed, and the insect-o-cutor which brings an end to many of the flies (where some continue the cycle). This was a turning point for Hirst as he confessed “…it was the first time I’d ever made anything that had a life of its own….something that I had no control over”.
Along with this was the obvious focal piece of The Physical Impossibility of Death in the Mind of Someone Living. Hirst created this piece as an attempt to scare or frighten the viewer and evoke a primal feat. Having a large shark in a big enough body of water, Hirst felt that this would be enough to frighten the viewer.

Room 4 –  With only two pieces in this room, smoking seemed to be a theme Hirst revisited numerous times. The Acquired Inability to Escape 1991, shows a steel and glass structure which generates a sense of viewer containment, as well as having a distancing effect on the viewer. Hirst is known for taking inspiration from Francis Bacon for this piece, seeing the cage-like lines and presentation of Bacon’s paintings behind glass has always fascinated Hirst as it gives an extra dimension to the painting. Along with this Hirst has also displayed his work Dead Ends Died Out, Examined 1993. As an extension of his museological display techniques, Hirst conflates the extinguishing of a cigarette to the extinction of a species.

Rooms 5 & 6 – These rooms were a hark back to the first solo exhibition Hirst had created in London, by transforming a two-storey commercial premises into an exhibition he named In and Out of Love. In one room, in a specially maintained humid environment, Hirst had hung white canvases embedded with pupae. The butterflies would then hatch, fly around the room, feed on sugar water and flowers, mate and lay eggs. In the second room Hirst had hung brightly coloured canvases with dead butterflies adhered to the surface, much like they had been landed on the canvas and dried into the wet paint. For this exhibition Hirst had turned the whole building into the vitrine with themes of life and death as well as beauty and horror, a duality which was present in much of Hirst’s work.

Room 7 – Pharmacy 1992 is a multi-part installation that develops on the earlier work Medicine Cabinets. The clinical order of the cabinets, their packaging and even additional elements such as the glass bottles containing coloured liquids representing the four elements, display the palliative power of modern medicine. This work is still as relevant today as when first created because of the consistency which has been present in the packaging of pharmaceutical drugs, “…they just got it right”.

Room 8 – Seen as a very fun room, this is definitely some of the brightest work on display. Containing a selection of Spin Paintings, similar to the Spot Paintings, they are created by using household gloss paint which is then poured onto the spinning canvas. This allows him to exercise distance from the execution of the piece and enjoy a great deal of experimentation with colour.
Also in this room is the piece Loving in a World of Desire 1996, consisting of a beach ball which hovers above a colourful box. Suspended on nothing but a jet of air, the ball flutters precariously above the structure showing the balance between love and desire. 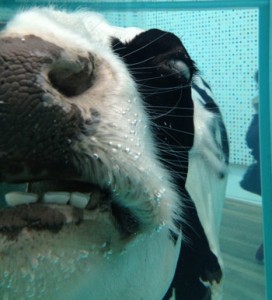 Room 9 – Containing another of Hirst’s notable work, first exhibited in 1993, Mother and Child Divided. This work marks a departure from the Natural History series from earlier work. This installation is made up of a cow and a calf which have been sliced in half and displayed in glass vitrines. The display has been created so the viewer can walk around each piece, but also allows them to walk through the separated halves of the cow and the calf. As a departure from Hirst’s earlier formaldehyde work which shows a preservation of living things, these have been bisected to reveal flesh, organs and bone structure within the mammals. Hirst described the process as “like creating emotions scientifically…you can see what’s on the inside and outside simultaneously”.
Along with this Hirst also displayed his work Crematorium 1996, an oversized ashtray filled with cigarette butts and ash. This piece is often seen as a modern day memento mori, as what can be seen as the accumulation of ash can also double as the cremated remains of a body. 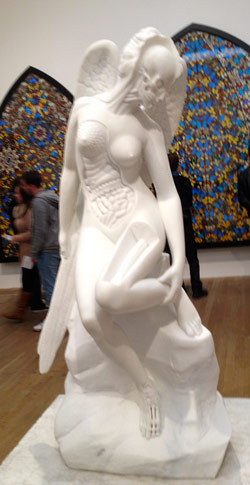 Room 11 – Hirst continues with the heavy religious themes seen in his work, displaying large stained-glass window like work, using the butterfly motif to show the fragility of life in his work Doorways to the Kingdom of Heaven 2007. These arch shaped canvases stand over 7 feet tall, with butterflies arranged into complex patterns reminiscent of medieval stained-glass church windows. In this room was also Hirst’s piece Sympathy in White Major – Absolution II 2006, a circular canvas with butterfly arrangement similar to a kaleidoscope effect. This piece has been used extensively for the promotion and memorabilia for the Tate exhibition.
In addition to that Hirst has also placed his white marble sculpture, The Anatomy of an Angel 2008, a unique sculpture which when viewed from one angle depicts the traditional ethereal body of an angel, but when viewed from another angle you can see the section of internal human organs and skeletal structure.

Room 12 – This room seems to serve as a counter-point to some of Hirst’s earlier work, showing a darker side to the previous vibrant butterfly paintings. Black Sun 2004, at nearly 3.5 metres in diameter, conveys a darker message than his previous work. Continuing his early work with fly motifs, Black Sun is made up of thousands of dead flies which have been solidified in resin, conveying a sombre message of death and decay.
In addition to this Hirst has displayed his work Black Sheep 2007, which too acts in conjunction with his some of his earlier work.

Room 13 – As mentioned earlier, in 2008, Sotheby’s In London presented an auction for over 200 pieces of work by Damien Hirst, this room acts as a tribute to that unified body of work. The wallpaper used in this room is a striking gold with diamonds and opulent motifs, which is actually based on the covers used for the catalogues for his Sotheby’s sale. Also in this room was Judgement Day 2009, a 30ft long cabinet displaying nearly 30,000 cubic zirconia, displayed similar to his earlier work Lullaby, the Seasons 2002. 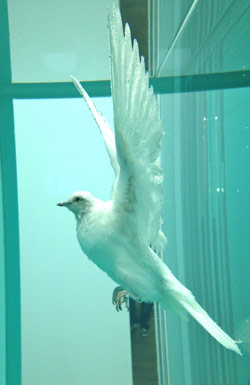 Room 14 – Sharing the last room of the exhibition were two pieces of work, Remembrance 2008, a pale Spot Painting edged in gold leaf, and The Incomplete Truth 2006, a dove suspended in formaldehyde, as if in mid-flight. The dove carries many symbolic meanings, a messenger of hope, the secular symbol of peace and the religious symbol of the Holy Spirit. This conflicting imagery is reinforced through the title of the work, not suggesting at any absolute truth.
“Life and death are the biggest polar opposites there are. I like love and I like hate…I like all those opposites. On and off. Happy and sad. In an artwork I always try to say something and deny it at the same time”.

The Damien Hirst Exhibition is currently on show at the Tate up until 9th September 2012.

We try to publish as many articles as possible, however finding the time to write is getting rarer and rarer. Therefore enjoy what we have posted and Follow Us to keep updated. Why not help out and become a Guest Author?