The Best Biking and BMX Games – Online and Console Games

Okay lets clarify here, we are talking about console/PC games as opposed to physical biking games (you can get hurt doing that!).
The console of choice depends on the game, but many are available on the Sony Playstation or the Microsoft Xbox.

You may remember the days of Tony Hawks Pro Skater, and soon after came the original bmx biking game, Dave Mirra Freestyle BMX. Dave Mirra was created in the same style of Tony Hawks in that it was 3rd person perspective and mirrored a very similar button layout. This style made it a very accessible game that allowed players to pick up and play, and would be one reason why the majority of kids had some experience with it.

Returning to the game brings back waves of nostalgia (bonus nostalgia for Spotify and Grooveshark users), but is there anything better available now?! We have a look: 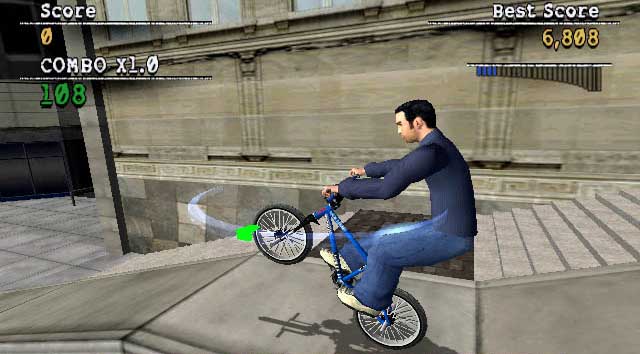 The Mat Hoffman series started around a year after the initial release of Dave Mirra Freestyle BMX, with the release of Mat Hoffman’s Pro BMX. Published by Activision on the Playstation, Dreamcast and Game Boy, the game also released a sequel just over a year later. It was Rainbows remade sequel that has become very popular among alternative sporting fans and received great reviews across top magazines and websites. The premise of the game is very similar to Dave Mirra in that the object is to combine different tricks and stunts on your BMX bike, and the most points gained wins. They also introduced a couple of different gaming scenarios where you have a Freestyle session, Timed session and multi-player modes.
As the game had a multi-platform release the graphics were dependent on the console, however the PS2 graphics had a noticeable advantage over that of Dave Mirras Freestyle BMX.

IGN gave Mat Hoffman’s Pro BMX an 8.1, and is arguably still one of the best BMX games available 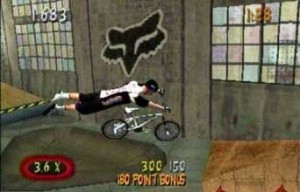 The naughties really was a decade for bike games as this title was released in 2001 on the Sony Playstation. Two-time ESPN X-Games gold medalist T.J Lavin lends his name to this BMX game from game producers THQ. From a series of MTV Sports related games, this release has not had such a warm welcome. Criticised for a lack of attention to detail, the game had many flaws in the gameplay. Often players would find the simplest tasks repetitive and frustrating, trying to grind a simple rail could take multiple attempts. Another notable flaw is the camera system, which is often a pet peeve for the 3rd person style camera control system. This problem had been near enough eradicated in similar games however you would often find the camera spinning and rotating while performing tricks. This not only left the control system hard to navigate, but also made the landing near impossible to stick.
Graphics for the game were seemingly split into two worlds, the pre-game navigation menus and styling…and then in-game. When in the menus the styling was clear, you could read sponsor messages on T.J’s t-shirt and there was an obvious effort put into the look and feel of the menu. When it came to gameplay, all that disappeared. Perspectives were not clear, movement was jolted and textures were unclear and suffered from horrendous texture clipping.

IGN gave MTV Sports: T.J Lavin’s Ultimate BMX a pretty poor score of 4.5, seems this would be one to avoid if you want good nostalgic memories.

With a break away from BMX games, Downhill Domination gives us a different bike game which almost exclusively features downhill riding. Released on the Playstation 2 in 2004 this game received some great reviews and endorsements from top names in extreme sports. Based on the premise of downhill mountain biking, many have likened the game to the popular SSX series. As opposed to the previous stunt based point games, this was a racing game which combined great gameplay with good visuals. The game is made up of 6 main riders with a multitude of maps and levels to play including single play career and multi-player modes. Graphics and attention to detail are surprisingly good for a game released in 2004. During game play you have control over the rider and can throw weapons, shunt and punch opponents, often leading to a bloody wipeout. The crash physics was a great highlight to the game and saw good use of rag-doll physics. There was also great variety in the course terrains, layout and detail that is given in a fast-paced downhill ride. From running water, chasmic jumps, polar bears, vehicles and deer the game was surprising and wildly fun.

IGN gave the game an 8.0 and many fans have been requesting a long-overdue (and unlikely) sequel. 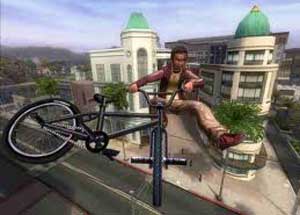 Released in 2005, this is the newest variation of a BMX game we have found. Released from a line of successful Tony Hawks games, American Wasteland also includes the BMX functionality even though it is predominantly a skateboarding game. With many gameplay modes available, this version of Tony Hawks was the first to include an open plan level with no loading times when transferring between areas.
As it is the latest skate/bike game we found then its no surprise it also has the best graphics. However as the BMX is an addition to the game it is hard to use the same yard stick across the game. This is in part because the BMX can be a tad tricky to control, and many people have found movements and tricks to become jerky during performance, comparable to the first Mat Hoffman release.
Even though the BMX aspect of the game is quite minor many have enjoyed this addition and has sparked many peoples interest back into BMX gaming, and left many people urging a sequel to Mat Hoffman’s Pro BMX 2.
Gameplay allows you to traverse similar levels and maps as the original Tony Hawks Pro Skater games but with the added benefit of having a BMX. Tricks include the normal rotations, kicks, grinds, endues and wheelies allowing you to string multiple tricks together for extra points.
Graphics are excellent in comparison to the other bike game titles, this game is more contemporary though and has had the previous titles to build upon.

IGN scored the game an overall 8.5 – I wouldn’t base just the BMX aspect on that score though.

Let us know which bike games were your favourites, or any comments on the ones mentioned above. I know for sure some will have those nostalgic feelings looking back at Dave Mirra and Mat Hoffman BMX games.

Kevin is a multi-talented author who writes irregular pieces for us that have been well read and distributed all over the net. Kevin normally writes about travel and entertainment so stay tuned to see what he is up to!