Security: The Evolution In Tactics Employed By Pirates On The Gulf of Aden

Somalia, a war torn nation on the African continent, is certainly making its mark in history. This small country is on the eastern side of Africa, across the Gulf of Aden from Saudi Arabia, at the southeastern end of the Red Sea. The Red Sea has Mediterranean access through the Suez Canal. Not only that, Somalia is almost a Gerrymandered country, taking up all of Ethiopia’s coast line and about ½ of Kenya’s coastline. In fact, Somalia probably has more coastline than land-locked national borders. However, this location near shipping routes and oil producers has not raised the attention of developers who would capitalize on the dry atmosphere and access to ocean waters.
Instead, the civil war that began in the early 1990s, and continues to this day, has rendered any form of organised government virtually powerless. The war between the Somali government and an Islamic insurgency keeps the country in turmoil and economically destitute. And, with the proximity to international shipping routes, the anarchy rampant in the country has revived an old practice – piracy.

In 2010 alone, 53 ships were hijacked out of the shipping lanes, with 8 deaths among the seamen. That, however, was an improvement from the 2009 figures, when 117 ships were hijacked. The improvement in numbers was due to the use of arms on the part of the shipping companies and to naval support. However, the Somali pirates are simply ranging further from their borders in order to seize vessels.

To date, Somali pirates have attacked 67 ships just this year, as of July of 2012. They have hijacked 13 ships and taken 195 hostages. Currently, the pirates are holding 13 ships and 185 hostages for ransom.
Take a look at the below infographic to see how piracy reports have grown between 2005 and 2010. This is in part due to changing tactics used as many pirates would employ a mothership which is anchored off-shore, and then the skiffs are launched from this point as apposed to the shoreline. This allows the pirates much more reach but also allows them to respond a lot quicker to potential opportunities. 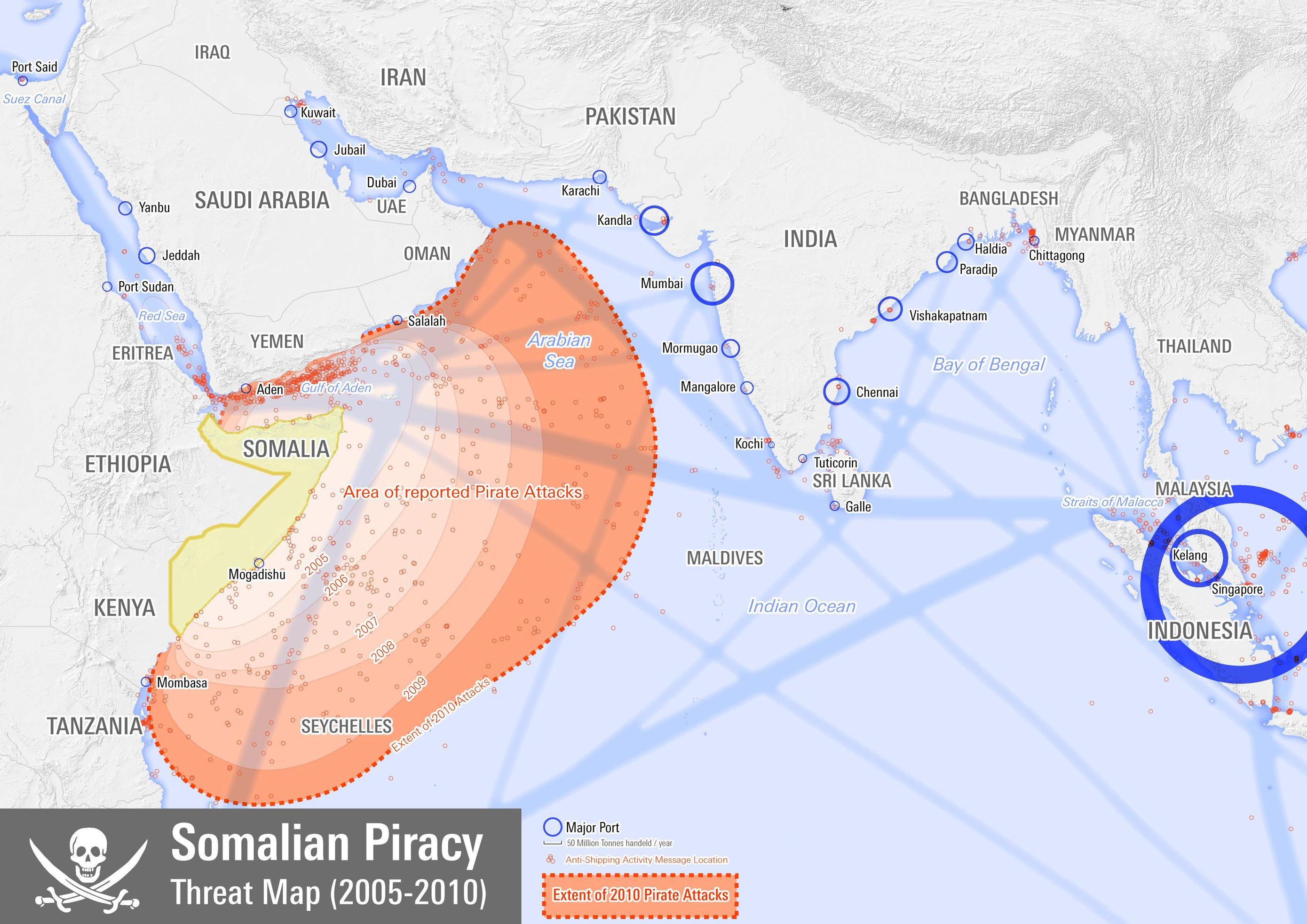 At first, the Somali pirates used traditional tactics to attack boats. They would sneak up on the vessel and board it in a surprise attack. Then, they would plunder the boat and its occupants, and beat a hasty retreat. However, that method has changed, and now the pirates are hijacking the ships for ransom.
One of the traditional tactics is that the pirates usually work alone. This means that they can attack whenever they want to, without any need to coordinate attacks with other groups. The smaller groups will attack fishing boats and cargo ships, robbing the occupants. Sometimes they’ll take the ship, too. 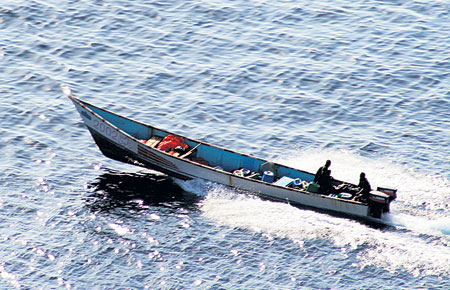 The age of technology has aided the pirates immensely. Now, they can use radar and sonar to track their quarry, and with more high-tech navigation equipment and communications, can hide in island inlets and attack with better accuracy.

In addition, they have access to much better boats. The small speedboats can easily overtake large ships, and can get out of sight of support ships much more easily. One of the new tactics the pirates use is to organize into large groups and coordinate their attack. This way, they can attack larger, more valuable ships. It also makes it possible to hijack the larger vehicles and kidnap the occupants. They then hold the entire lot – ships, cargo, and occupants – for ransom. Usually, this type of piracy is sponsored by a warlord, a foreign government, or by corrupt officials.

This has lead to the development of terrorism by the pirates. They are not robbing and kidnapping in order to make money. Instead, they are being hired to destroy property and lives, and to disrupt trade and commerce. In these cases, no hostage is safe. The pirates are desperate and well armed.

Another of the pirates’ new tactics is swarming the victim ship. They will send 12 or more skiffs, loaded down with pirates, each carrying a boarding ladder. This type of swarm means the ship is attacked on all quarters, with little chance of fending off the attackers. Shipping companies are now placing armed defence teams onboard their ships, with a security coordinator to manage defence against the swarms.

Decoy boats are also being used now. Since the pirates have availability to fast skiffs, they will send one to feign attack. While it has the attention of the crew, another skiff will come up on the stern of the ship, often approaching totally unnoticed. The use of decoy ships is not limited to international waters. These attacks happen well within the oversight of the military protection provided by various countries.

Murder is another tactic new to todays’ pirates. In the past, hostages were held for ransom, since money was the entire motive for the act of piracy. With the terrorist contracts out, murder is now the goal. Once the military gets involved, the pirates slaughter the captives. 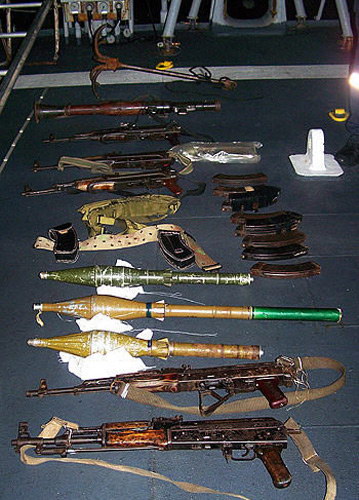 Of course, the old movies and stories featured a pirate with a hook for a hand and a cutlass gripped in his teeth. These days, pirates carry automatic weapons such as AK-47s. They also have grenade launchers, rocket launchers, and machine guns, and they aren’t shy about using them.

This is especially true of the hired pirates. They are organized and bent on destruction, and armed to the teeth. The planning that takes place with this sort of attack often included bribery to attain important information.

The pirates also use stolen uniforms to gain access to restricted areas. They also hide their identity with ski masks or some other disguise. They will attack in full daylight or at night, without regard. They will often use grappling hooks to board the victim ship.

No End In Sight

There is, apparently, no end in sight for Somali pirate attacks. However, changes are being made on the ships being attacked. Most ships now have protective measures in place and a lot of the attacks are now being prevented successfully. You can use the Anti-Shipping Activity Messages database to see individual reports of attacks on vessels and you will notice many of the piracy attempts are being prevented. You will notice the ASAM database goes back to 1978 with the first report of piracy, however you will notice that many of the ASAM entries are Naval or even robberies, now 99% of reports are piracy based.
The first thing the captain must is increase the speed of his vessel. He can’t outrun the skiffs the pirates have, but higher speeds make boarding much more difficult.
Then, you create a serpentine pattern. This causes the ship under attack to generate a huge wake, upsetting the pirates boats.
Next, the crew must toss barrels overboard. These barrels are connected to the ship, and help to keep the pirates from getting their ships close enough to board easily.
Razor wire, netting, and wood and metal grates are placed across all walkways and access areas to keep any pirates who succeed in boarding from making progress.
The NAVY must be contacted as soon as possible, so they can get ships to the scene.
Get non-essential crew to safe areas of the ship.

One preventative method which is increasingly popular amongst high value vessels is to hire an on-board maritime security officer. This security personnel is usually armed and if pirates are approaching then they are able to repel the attack through warning shots fired towards the approaching pirate skiffs.
However, small ships and boats, such as fishing vehicles and yachts, don’t have such protection. In these cases, experts suggest that the owners always leave a schedule of your planned journey with friends and get plenty of information about activity in the area which you’ll be traveling. Make sure, as well, that your GPS is working properly and the positioning beacon is working properly. Learn to say hello in the local’s language and, most of all, don’t resist if the pirates try to board.

Cross Deck are an internet based company aiming to connect the security industry like never before. Sign up to their site for full access to security recruitment, jobs and certified training courses.

Security Jobs UK
Tagged with: gulf of aden • pirates • security • somalia
Like? Then share with your friends